The Trustee sub-committee that reviewed applications was impressed with Saint Joseph’s history of stewardship of our resource and their efforts to promote drinking tap water. The installation in the Harold Alfond Center also provides significant exposure and access. In the 2012-2013 academic year more than 70,000 visitors used the facility.

“We are fortunate in Greater Portland to have a superior public water supply,” stated PWD Board President Guy Cote. “With these grants, we want to promote the area’s great tap water and encourage others to help expand access to it.”

Water bottle filling fountains are gaining popularity across the country. They are being installed in record numbers at colleges and schools as sustainability coordinators and student activist groups along with the non-profit groups that support them like Take Back The Tap, band together to promote drinking tap water. At Saint Joseph’s College the Eco-Reps, a student group that promotes sustainable behavior, has embraced the fountain and is encouraging its use by subsidizing branded water bottles and T-shirts.

The water bottle filling station is a fitting addition to Saint Joseph’s College’s environmental initiatives. Supported by its mission and core values, the College strives to cultivate a stewardship ethic among its faculty, staff, and students, as well as the greater Portland community. “This will help to cultivate good stewardship toward Sebago Lake’s watershed and toward our planet,” said Dr. Jeanne Gulnick, the College’s campus sustainability coordinator and an assistant professor in the natural science department. 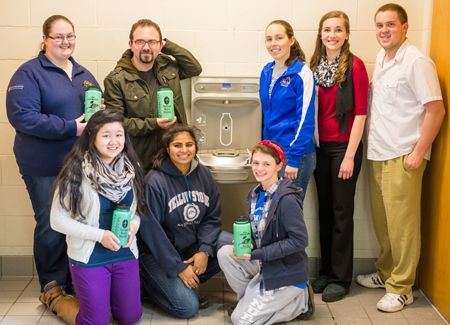